Terrible Search Function (here's how to make it better)

I type in the name of my bank "ING" and I get every record that contains any word in any field that contain that text string.   essentially I get half of my records displayed (because I use the notes field for additional info and a lot of words have "ing" in them like "creating" or "having", etc.

Ok, so assuming my search query is too broad.... (anticipating push back)

I adjust my search and type in "ING Online" (which is what my record is called)  but here I get all entries containing words with containting text string "ing" AS WELL AS any records that separately contain the word "online" which most of my records do because everything is online.

So i have to manually scroll through my records to find what I'm looking for.  Annoying. Time consuming. Inefficient.

This did not happen in pre Version5 versions.  I could much more quickly retrieve records in V4. Instantaneous because I always knew the unique text string to bring up any of my 800+ records.

This is solved by making the default search "whole words only" and "exact text string" so that only records with the words "ING" and "online" in that order would appear.

P.S. they already know I'm not happy with the search on windows and android not searching the label fields.

@Tim Can you let me know what type of device you are using? So far as I'm aware, the searching has not changed since mSecure 5, but I would have to check to see how it's working in correlation to v4.

The earlier version search might be seen as too simplistic, but it was definitely quicker to find something. I understand that you're dealing with a lot of boofheads who will complain "I can't find my record when it's there" even though they just haven't put in the correct text string.   Which is why I suggest, offering a tightened up search options for those who want it via 'preferences'.

@Tim I am trying to figure out what differences you are talking about between v3 and v6, because I believe that's important if you are comparing the two. I just tested what you are describing by setting up 3 records on my PC running mSecure 3.5. I created three different records, one is named "Google," one is named "ING," and the other is named "Famous Places." In the Google record, I added "ing" to the end of the password. In the Famous Places record, I added the word "flushing" to one of the fields stored in the record. When I search by typing in "ING" in the search field in 3.5.7 on my PC, I get all three records returned. I also get the same results in mSecure 4.5.4 on my iPhone.

Am I misunderstanding something in the way I set up the test?

I can add what you are talking about as a feature request regardless, but I think it's important to really understand when things are and aren't different between versions, especially if there's complaints involved. I still don't know if I setup the data correctly to reproduce the results you are talking about in mSecure 3, but need to do that to make sure I understand if there actually are any differences in the search feature between versions. Since I have tested extensively all versions from way back to the beginning of mSecure 3, I'm pretty sure the search feature is the same, but there are many times I have found out my assumptions are mistaken.

Good questions. will try to help. 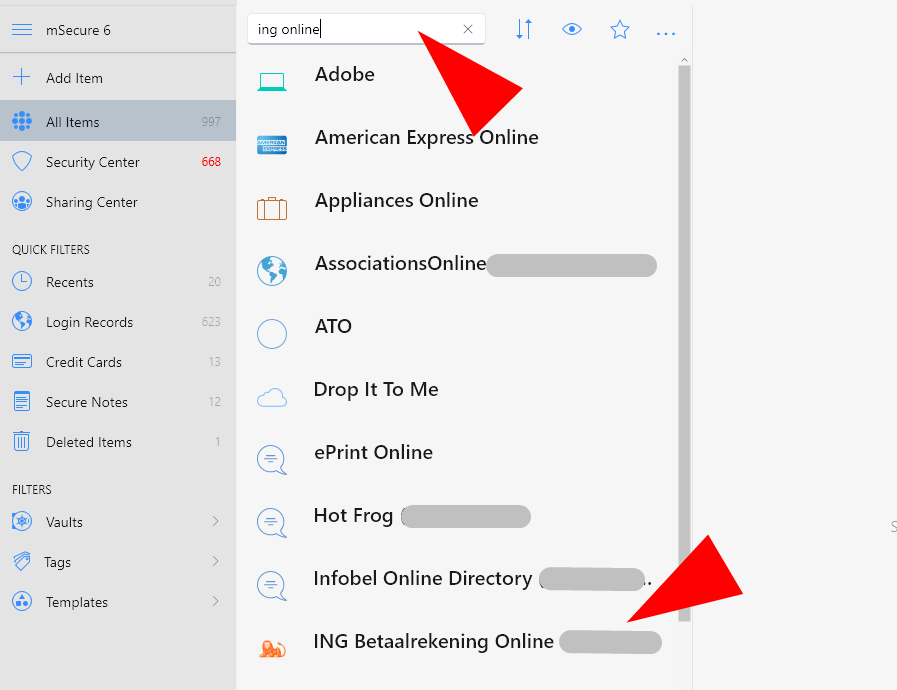 taking a look at why other entries now pop up. Eg, adobe.... 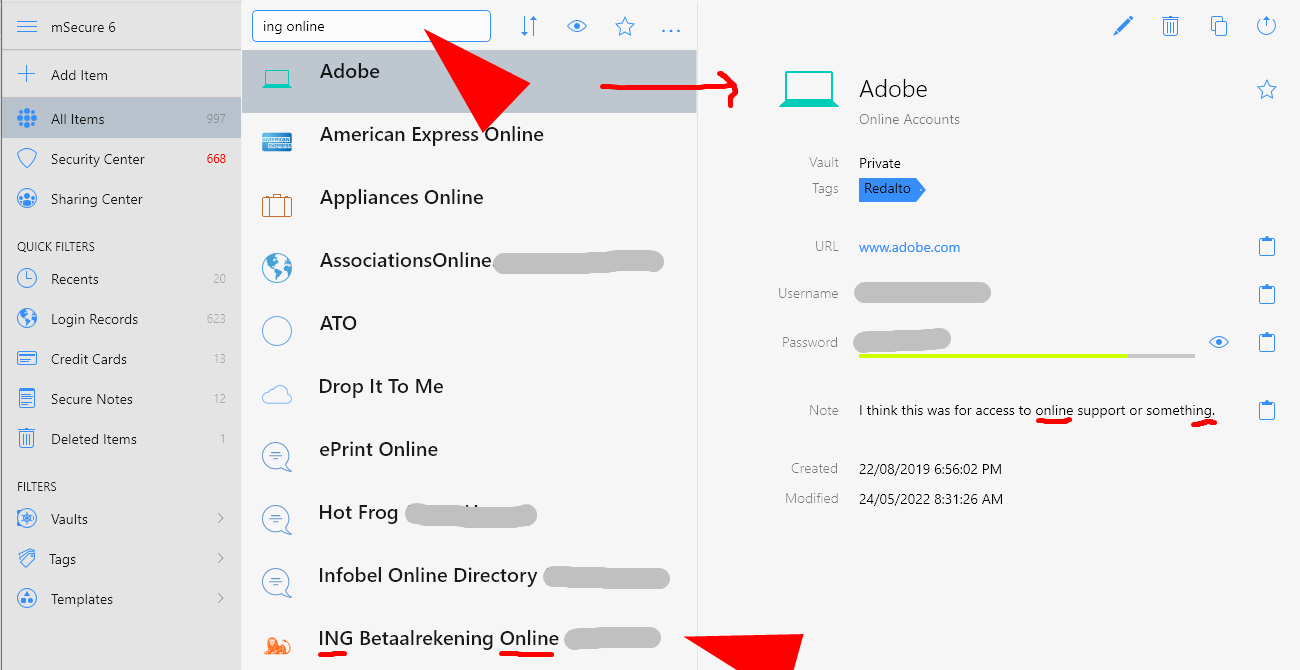 Version 3 vs 6 = partial words now included in search as default.

Thank you for the clarification. I didn't understand you were typing in two different terms for the query, which is a very important detail. One more question, are you seeing this same thing happen in iOS? I wouldn't be surprised if some things have changed in the Windows version, but for iOS, I would be very surprised if it was different.

Search doesn't work at all in IOS.  In V4 results would load as you are typing. In V6 you type query and then hit search, and nothing happens.

I'm still using V4 for this reason, unfortunately installing the V6 version on Windows 10 has broken V4 Dropbox Sync so I can't add new records there.

Searching does work in iOS. We couldn't release the app if searching didn't work. There's something going wrong here on your device, because the search feature works just like it did in mSecure 5 (and mSecure 4). What do you mean when you say you type in a search query and then hit search and nothing happens? There is no "Search" button in the record searching in iOS. Are you trying to search for an icon in the Cloud tab? After you tap the magnifying glass in the top right of the main view, the search field slides down. After that, as you type in letters, and the search happens automatically. There is no "Search" button to tap.

For Dropbox syncing, you most likely have an outdated version of mSecure on your PC. Whatever issues you ran into when Dropbox made changes to their API's has since been fixed in newer versions of mSecure. What version of the app are you running?

in msecure 4 (iOS) - i type in a search query and it automatically shows the result.

yesterday in msecure6 (iOS) - i type in the same search query and the list of 999 records did not change on my device. in IOS keyboard there's the 'search' button - that i also clicked and nothing happpend.

today - the records are now successfully filtering (i've not done anything differently today vs yesterday - perhaps the search db hadn't fully indexed my records yet?).  but when i compare the same search query across the two versions

result in IOS when comparing verisons -> in V4 I get 1 x result (because i've setup unique text in each record to allow me to do this) but in V6 I get multiple records. in this instance, my assessment is that in v4 - search query for multiple terms users AND operator whereas V6 it's an OR query operator.

As for the old Windows version, it's 3.5.7 (rev. 717) - when i click reconnect to dropbox db it says i'm using an out of date browser (inbuilt into software).  i've looked at my dropbox account and both old and new versions appear to be using the same dropbox file so there's a conflict there. don't think that's solvable.

I don't agree at all that the search method is terrible - it might not work so well for some in a relatively enclosed space such as mSecure, but in FileMaker, which is my programming and working field, the fact that I can search in a field like "Edinburgh Main Station" for each of the words separately is a very great working tool.

I can then search for all the words individually and come up with everything about Edinburgh, all Stations, or just the main ones.

It all comes down to an intelligent application of search expression syntax.

In a forced upgrade situation, the user experience should be equal to or better than where you are forced to migrate from. In this case it's not better, as clearly outlined above.

Thank you very much for your feedback @David.

@Tim Your search issues have been noted. For the Dropbox sync issue, direct linking to a Dropbox account is no longer working in the older version of the app. You'll have to use the "Sync With a Shared File" feature instead if you want to continue using Dropbox syncing in that version of the app. Simply change to that sync feature, then select the correct folder in your Dropbox account to continue syncing as you did before.

Syncing with shared file works. Thanks.

Search. Hope the next iteration of search will tightened. In the mean time looks like my best solution is to add more unique text strings in the notes field of each of my records to allow quicker retrieval of my most common records.  However doing this reveals some further flaws.

In the above example, I've conflated my record name "ING Online" to "ingonline".  Yet, bizarely it still brings up a record that has no instance of that text string (but does contain the word "invoicing" and "online" in distinct fields). Not sure what this means, perhaps Msecure search uses a Google like thesaurus function or has some sort of record indexing issue.  I'm not going to give you details on a public forum but if you want specifics reach out to me by email.